The (un)moveable nature of public opinion on votes at 16

Ahead of 'Is it time to lower the voting age to 16' pre-Annual Conference event on Sunday, 14 April 2019, this article by Joe Greenwood looks into why public opinion might have been in favour of allowing 16-17 year-olds to vote in the EU Referendum but cannot be persuaded to support changing the voting age to 16.

Behind the ongoing Brexit shenanigans, the debate over the voting age continues to quietly rumble on, sustained in part by the work of the APPG on Votes at 16, which recently released its campaign report. Indeed, there has actually been a direct link made between the dominant political issue of our day and the question of what the voting age should be. In December 2015 Ipsos MORI conducted a survey experiment showing that if respondents were asked about ‘giving 16 and 17 year olds the right to vote’ for the forthcoming EU referendum then net support was +11%. By contrast, if they were asked about ‘reducing the voting age from 18 to 16’ then net support was -19%. The importance of how we ask the question about voting age has been shown by recent public opinion research by YouGov. The most comparable of their results are from August 2013, when net support was at its lowest (-40%), and November 2017, when net support was markedly higher though still roundly opposed (-27%). However, when the same question was asked without the ‘Neither support not oppose’ option in September 2013 and February 2015, net support was higher (-36% and -19% respectively). This shows the importance of the answer options offered and suggests that those who are unsure about the issue may break slightly in favour of supporting a reduction in the voting age.

To examine the impact of question wording on support for votes at 16, I worked with colleagues at YouGov to replicate the Ipsos MORI experiment in November 2017, removing the reference to the EU referendum. The goal was to make the findings less context specific, but we were still interested in the impact of how the question is framed. We found that when asked about extending the right to vote net support was -15%, whilst asking about reducing the voting age produced net support of -27%. We also wanted to test the effect of priming on other legal ages so we ran a subsequent survey experiment that also asked respondents about purchasing alcohol (net support ranged from -66% to -69% depending on the question wording) and marrying without parental consent (net support ranged from -46% to -58%). Asking respondents about these other areas before posing the question about the voting age does not appear to have as dramatic effect as the question wording itself. Perhaps surprisingly, asking about other legal ages first seems to increase net support for votes at 16 by approximately 5% (whether the question is asked in terms of extending rights or reducing the voting age). By contrast, asking about extending rights rather than reducing the voting age (whether after mentioning other legal ages or not) seems to increase net support for votes at 16 by roughly 12%. What is clear is that this is an issue on which at least a section of the public does not hold staunch opinions and are open to being persuaded in either direction. 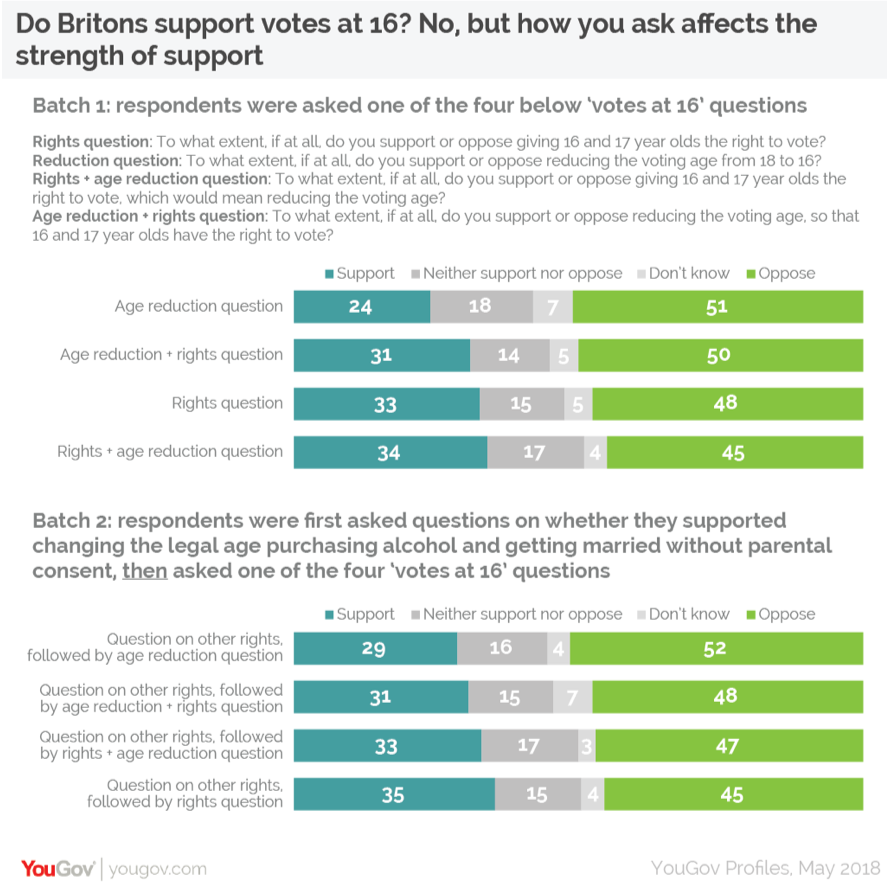 Despite the above, the public remain broadly opposed to extending the franchise to 16-year olds. Crucially, their favourability is likely to be strongly related to other political and demographic characteristics. Looking at such relationships in our data, we found that Labour voters, Remain voters, and SNP voters are markedly more likely to support extending the franchise, whilst Conservative voters and older respondents are markedly less likely to do so. This comes as no great surprise but indicates that whilst some voters are open to being influenced by the manner in which we ask them about votes at 16, and the narratives that are built around the issue, there are also those who are likely to hold strong and immovable positions on extending the franchise.

This is blog was originally published in the House of Commons All-Political Party Group on Votes at 16 report.

Joe Greenwood is a Fellow in the Department of Government at LSE, and his research interests include political participation, political psychology, privilege, and social inequality. He previously worked in political polling at YouGov, and also has an interest in mixed methods research. He tweets @niceonecombo.