Home > News > A bipartisan compromise on voter identification is needed in the UK. Canada has a blueprint.

A bipartisan compromise on voter identification is needed in the UK. Canada has a blueprint.

The storming of the Capitol Building in Washington D.C., in January 2021 showed that democratic breakdown can occur quickly and unexpectedly, when political parties come to blows over voter fraud and electoral integrity.  America has held itself up as being a model of democracy and has promoted ‘fair and free’ elections abroad for decades.  Yet the sharpening polarisation over claims of voter fraud led to events that shook American democracy to the core.

Across the Atlantic, there have been deepening debates about the conduct of elections in the UK.  The government insists that current polling practices enables voter fraud.  The Elections Bill therefore proposes that citizens must show voter identification before being given a ballot in polling stations.  The opposition claims that the incumbent is trying to disenfranchise voters through Trump style voter suppression.  The UK therefore runs the risk of following the US down a rabbit hole of disputed election results, low trust in in the electoral process, and raucous scenes last seen in Britain in the nineteenth century. 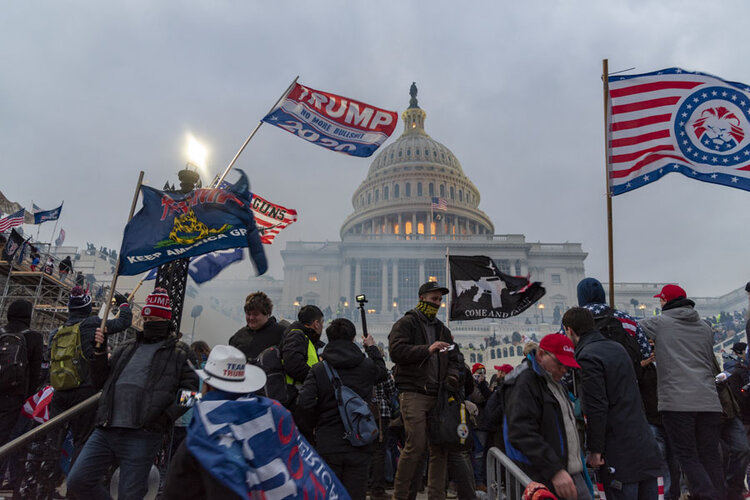 THE RESEARCH ON VOTER IDENTIFICATION

The reality is that impersonation in polling stations, the problem which voter identification is proposed to fix, is very rare. Academic research on the nature of problems in polling stations find that the most significant problem is that many voters find that their name is not on the electoral register on polling day.  There are issues with accessibility in some polling stations. But broadly speaking, elections run well and smoothly.  There therefore is no evidence of voter fraud.

Moreover, evaluations of the voter identification pilots do show that it does lead to many citizens not voting, either because they don’t have the identification or because they don’t want to show it on principle.  This is not disenfranchisement – but it is making it harder for people to vote.  This is the opposite to an inclusive voting practice.

It is not clear, however, that the Conservative Party would benefit politically from a reduction in turnout caused by voter identification.  Older voters are amongst those less likely to hold the necessary identification, which are the Tories’ staple voting bloc.  Electorally, it could be shooting itself in the foot.  Nonetheless, voter id would still make it harder for marginalised individuals and groups without identification in the process, which is lose-lose for democracy.

READ THE LESSONS FROM THE ENGLISH VOTER ID PILOTS

A COMPROMISE THROUGH ‘VOUCHING’

The government points to it’s manifesto pledge to introduce voter identification as well as the Pickles report, written in 2016, which recommended the change.  Neither provide strong legitimisation.  Few voters study proposed changes to electoral rules in party manifestos when they make up their mind on polling day.  As a former Conservative Party Chair, Erik Pickles was hardly an independent figure in guiding the government.  His report was not written with the transparency and spirit of compromise that a parliamentary select committee provides.

But voter identification could be introduced with minimal effect on turnout if sufficient safeguards are introduced.  Both sides could then be happy: voter security mechanisms are ensured, but with safety-valves for participation.

“There are tried and tested solutions to reducing the impact of voter identification on participation. The Elections Bill should introduce amendments to allow provisional voting, different forms of identification to be presented - but most importantly ‘vouching’, where citizens with ID can vouch for the identity of those without.

As evidence that I gave to Parliament set out, there are three immediate options for compromise.  The first is that citizens without voter ID on the day could be issued with a provisional vote.  They would be allowed to cast a ballot which would be put into a separate box, which could be included later on, if voter identification is later provided.  This is a common practice in the US and ensures citizens have an opportunity to still vote.  This would not be ideal because it would cause delays in the results and still doesn’t make voting easier for citizens without the necessary identification.

The UK can learn a lot from Canada, from where the third option of ‘vouching’ solution can also be borrowed.  The vouching system allows a citizen who with id and appears on the electoral roll, to sign an affidavit confirming the identity of another voter who does not have identification.  This provides a clear paper trail linked to registered voters so that any suspicions of irregularities can be investigated.   It also ensures that many citizens without identification, or those who feel uncomfortable providing it, can still cast their vote. Family, friends and neighbours can help one another to participate.

Canada has long held this system.  It was removed as part of the Fair Elections Act in 2014, but reinstated in the Canada Elections Act 2018.  Roughly one per cent of the population use this as a way to ensure they can still vote.  Implemented in the UK, this could help roughly half a million people.

There is much more to the Elections Bill than voter id.  There are concerning proposals for the government to exert a more direct control over the independent Electoral Commission, for example. Here too, academic evidence and international experiences insights that can help defend democracy.  The independence of electoral bodies is a vital component of a well-functioning democracy.  But there are also some important parts of the Bill which should be welcomed, such as digital imprints on social media adverts from political parties.

Compromises on both sides of the political aisle therefore are needed to ensure that the the Elections Bill battle does not spill over into the streets for a more contentious battle at the ballot boxes.  Democracy really is too fragile in the UK as well.

Toby S. James is Deputy Director of the Electoral Integrity project and Professor of Politics and Public Policy at the University of East Anglia. T: @tobysjames.

This blog was originally posted to Electoral Integrity Project website, with the orginal blog here.